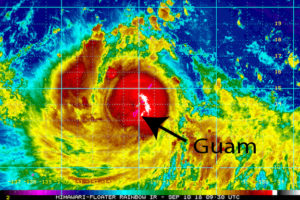 The lights flickered as me and my family looked up nervously.  We have never lived through something as exciting or extreme.  Sure, freak snow storms pound our small-town Alaskan community every year, but this is different.  This is the material that makes up news reports.

The locals seem to be pretty chill, but the military families have gone bananas preparing for this typhoon.  The gas stations on the navy base were backed up into the streets–everyone in a rat race for gas and propane.  All the grocery stores were being raided and shoppers had switched to an every-man-for-himself survival mode.  Windows around town were getting boarded up.  It was pretty much a set of a zombie apocalypse.

So here we are–stranded on a tropical island like sitting ducks, waiting for the mass storm to attack.

We tuned into the TV right away to listen to the weather this morning.  Bus routes were being held to support those in need of shelter, homeless people were flocking to community service projects, and families (including us) had shut themselves in.  At first, if I had to be honest, I was a bit disappointed.  There was a bit of rain, but nothing extreme was happening.  I was about ready to go bang my head against a board after an entire eight hours of TV and sitting.

Then the wind started to pick up, and out through our rain-smeared window was a dancing palm tree.  What are those things called?  The big balloon guys in front of car lots that wiggle and roll to the wind?  That’s exactly what the palm tree was like.  It whipped and shook its fronds in a sort of “jazz hands” kind of way to the gusts and exhalations of the wind.

The sky was an ominous gray, casting a veil over the sunset and sky.  Joshy has nearly been killing us in the crossfire between him and the Boredom Beast.  The constant drumming of the racquet ball against the wall, the frequent questions about the computer, and the need for neuro-stimulation has driven us all a little mad.

Around 7:30 this evening, a flicker finally proved to be more than a flicker.  All our apartment fell into darkness broken only by our emergency flashlights.  The shut-off TV offered a natural silence, as well as the therapeutic drum of rain.

But the power is not our only problem.  Today, while sitting on the couch, I couldn’t help but notice that my foot was wet.  Looking down showed a huge pool of leaking rainwater filled with hundreds of floating ants.  That meant the next hour was us mopping up the tile floor with bathroom towels and rearranging the living room furniture.

Let me tell you–a typhoon is WET!  Today, dad and Joshy decided to trek to the Payless Grocery Store a few hundred yards down the street.  When they returned, it looked like they had completed the “Ice Bucket Challenge”.  Not to mention the store was closed along with probably every other store on the island.

So now I lay here in the dark, writing within the illumination of flashlights, headlamps, and two candles.  Josh, making the best of the situation as eight-year-olds do, has constructed a shelter fort in our bedroom.  The blackout is adding some zest to our otherwise rather dull day.  Despite the “here we go again” attitude the locals have expressed toward the typhoon, and the utter panic of our red, white, and blue military, I kind of like it.  It’s an adventure.  Obviously we shouldn’t worry about anything big.  We’re on a cliff, so no flood risk, and since we’re all in an apartment, no worry about damage costs.

All in all, it’s something new, and let’s face it: who gets to say they spent their sophomore year in a tropical typhoon?