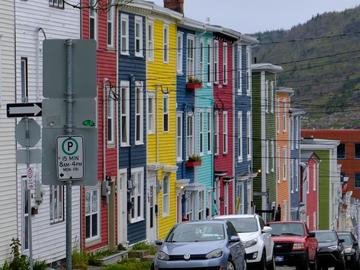 The drive to St. Johns was long, and very much like the Tanana Valley. Before arriving we stopped for the night in Bonavista, where a huge iceberg the size of a five story building floated on the village’s coast. The next morning we cruised across hilly grasslands, to eventually find ourselves amongst the “jellybean houses” lining St. Johns’ narrow alleyways and roads. The twin towers of an immense stone church shadowed the surrounding shops and streets, and bulky freight ships sat ready to depart from the port.
Our hands were nearly numb from the cold as we meandered our way past Deadman’s Pond (whose name’s origin comes from the French and Indian war, but the specifics of which is unknown). Finally we faced a gigantic hill, known to the world as “Signal Hill”. A stone fortress, a remnant of the French and Indian War, stood proud on the crest of the stony knoll. The top overlooked an inlet, ships popping in and out of the harbor. Signal Hill is so called, because it’s where the first trans-Atlantic wireless signal was sent by Marconi (famously sending the letter “S”, and totally ripping off Nicola Tesla).

Today we finally made it to Cape Spear, the most easterly point in North America. It was rainy, incredibly foggy, and freezing. Dad was extremely disappointed that the “Most Easterly Point in North America” plaque was taken down for repairs, so there wasn’t a sign to commemorate our achievement; so I guess the past seven thousand miles led up to a picture of us sadly standing around a bare rock where the plaque used to be.
Also on Cape Spear was a WWII garrison snaking it’s way underneath the ground. It was a little eerie, with cells coming off corridors in the near blackness of the underground.
The rest of today was spent wandering our way through the markets, masonic temple, and public park of St. Johns. During our walk, we ordered a Beaver Tail  (Canada’s version of an Elephant Ear) from a nearby food stand. We all felt weirdly honored when the ladies at the stand informed us we were their first customers of the day–it was nearly six o’ clock.
During our St. Johns travels we met a couple twice that we previously met in Lance aux Meadows (almost five hundred miles away). Today was our last full day on Newfoundland, and tomorrow we’ll take the ferry out.