Yesterday we woke up in a nice hotel in L’Anse aux Meadows. The town is at the northern most tip of Newfoundland. Its bays are spotted with thousands of icebergs. The coastal region is similar to Seward.
We visited a Viking settlement recreated near the landing of Leif the Lucky over one thousand years ago. The site represents the first time in human history the eastward migrating people and the westward migrating people finally “completed the circle” by meeting each other on the island of Newfoundland. The tour guides were extremely into character, kind, and obviously passionate about their town’s heritage.
Dad acquired some breathtaking aerial shots of the wooded Viking village surrounded by rocky wetlands. Near sunset, we arrived at the Arches, stone formations carved from the middle by tidal erosion. Dad–in a feat of courage and daring–was obtaining more jaw-dropping footage by piloting the drone through one of the lower arches. In a sick twist of fate, the drone struck the cragged rock and was lost to the North Atlantic. A brief eulogy was given, and respects were paid, before driving back to the campsite in mournful silence. 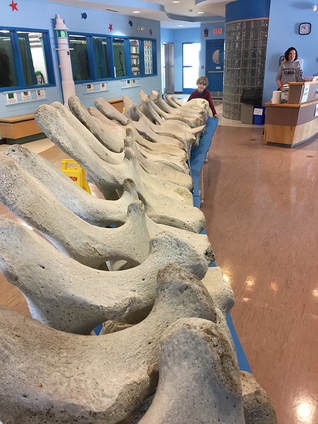 The weather finally turned the morning of our departure from Gros Morne. It was bright, clear, and sunny. Still cold. We drove to Norris Point and checked out the bayside Marine Station (an educational research facility). In the picture you see, Joshy is standing at the end of a sperm whale spine in the aquarium’s entrance.
A guide led us in a small group to the tank room, and showed to us urchins, crabs, lobsters, and a wolf fish (who we were warned could bite our fingers clean off). During the length of the tour, I kept an eye on one snow crab who made surprisingly good progress in escaping. At one point the guy managed four legs over the tub. Joshy enjoyed the touch tank, where he was permitted to handle crabs, flounders, urchins, and anemones.

Before taking off to Twillingate, we 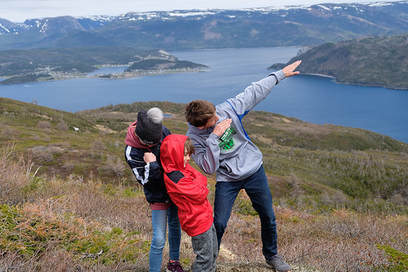 took a small detour. All of us hiked an Angel Rocks-sized hill overlooking the bay. The waves’ ripples ripped along the cobalt surface of Bonne Bay, and wind tunneled in-between canyons only visible from the summit of the hill we hiked. In fact, the Marine Station is sitting on the island right behind us in the victory pose photograph.

We are now in Twillingate, the northern-most of a chain of islands. There have been no whales yet, but all of us remain optimistic.