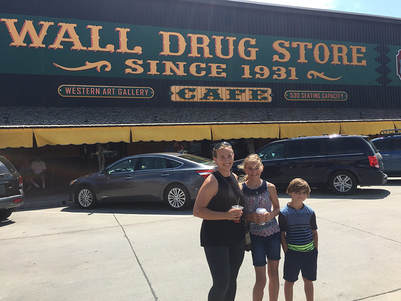 The family got to stay with my Aunt Heather and Uncle Shaun in Minnesota for about a day and half. Joshy had a field day, and played a near twenty-four hours of Minecraft with his cousin Kinley, while the rest of us got to watch illegal fireworks for Fourth of July.
After a relaxing stay, we hit the road through South Dakota. At times the bad lands were crawling with rocky ravines, towering cliffs, and craggy boulders. Other times the drive made Kansas seem exciting.
The next morning, we checked out “1880 Town,” which was next to our campsite. The attraction is a compilation of authentic western relics– such as old rickety shops, barns, print presses, carriages, etc.–put together in an artificial town. It was built in the same area where “Dances With Wolves” was shot. It was spectacular, and made us feel as if we stepped into a “Wild West” movie set.
Later that day we stopped by Mount Rushmore, which was gigantic. To imagine the utter engineering brilliance (and dynamite) the feat demanded was incredible– especially Roosevelt’s glasses.
If you have ever driven through South Dakota, then you know that lining the highways are literally thousands of billboards for some place called “Wall Drug”. In all our road trips, we have never stopped to see what it actually was, so we all felt obligated to check it out. In the end we found it was just a street with a bunch of stores, and none of us know why it was such a big deal.

Cool Fact: When recording “Dances With Wolves.”, the filmers owned, and used, a herd of 3500 buffalo during a hunting scene.