Yellowstone was great, but since we’ve seen it once before , we passed through it a lot quicker this time. Old Faithful was exactly what it sounds like–a burst of water every 94 minutes. Yay! It’s a little disquieting to know that you’re walking in the crater of a super-volcano during the visit. If Yellowstone ever erupts, it would probably contribute to a worldwide mass extinction.
Boardwalks spanned unstable crusts, broken occasionally by prismatic pools of boiling water. A few times mini-geysers went off, which over time erodes fascinating patterns, etched into the surrounding stone.
Out of Yellowstone, going through Montana, we stopped to visit our friends–the Ruis family. They were a blast and we all pigged out to a huge barbecue dinner. [Notably absent was Lloyd, the Godfather of Greek Day] That night, because there was no nearby KOA, we camped in the Walmart parking lot. I guess we weren’t the only ones with the idea because nearly half of the other parking spaces were occupied by RV’s and pull behind trailers. It’s like a demoted version of a shady trailer park.
We’re in a rush to get Grace to Seattle for her knee, so we’ve been pushing for the past few days. Right now we’re in Spokane, which has been fun. It has a to-scale gigantic red Radio Flyer wagon in it’s park, so that’s cool. There’s a hundred year old carousel as well, which the rest of the kids rode. I obviously didn’t because I am much too old and mature.
Dad got stunning drone footage of the city’s dam, the clock tower, and the River Walk Park’s “Rotary Fountain” (which is really awesome). 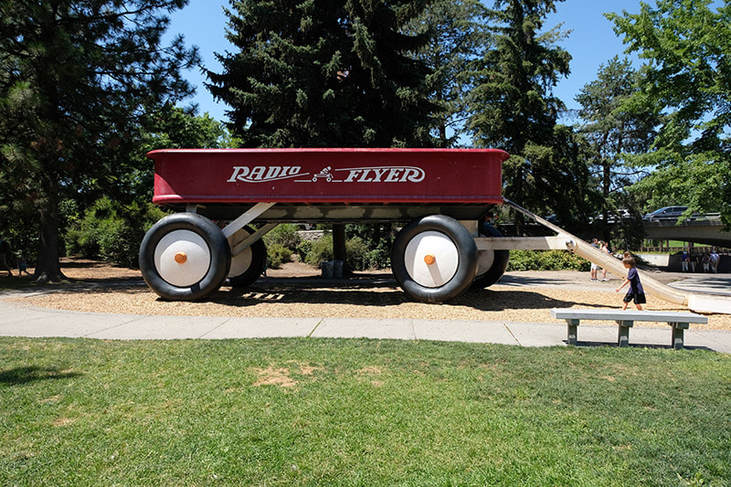