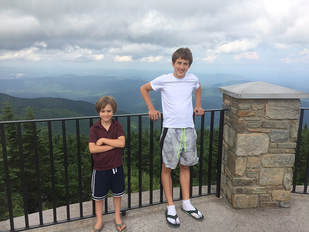 We’ve finished the Blue Ridge! I can say that Mom is nothing less than relieved. There were times the car tightroped between two 1000′ drops. Mom was not a fan. During the drive we drove up Mt Mitchell, the eastern United States’ highest point (6684′). When we tried to take a picture of the “Highest Point in Eastern America” sign, the phone went dead,  so no proof.
On our straight shot towards Columbus we barreled into a thicker-than-molasses rainstorm. Our only reference was the brake lights of the car in front of us. Lighting crashed only a few hundred feet away. Cars were literally stopped on the interstate because you couldn’t see in front of you.
It was all worth it in our minds though, because we were planning on kicking back for three straight days once we got to Columbus. The campsite we were staying at had a few insane lakeside waterslides (perfect against the relentless Mississippi heat). We had nothing big planned, and just thought that we would unwind near the water.
For dinner we gorged ourselves at “Little Dooey’s”, the best barbecue the south can offer. We were ready to crash for the night when we finally puttered our way into the campsite. As we checked in, and expressed our excitement, the office lady’s face turned solemn. She explained to us that the waterslides have been closed for three years, and that the beach wasn’t even open for public use.
This left us sweltering the next day in the hot, sticky weather with nothing to do while Dad was an hour away at the Air Force base with the car. In a snap decision we all decided to cut the three day stay short and zip up to Memphis, Tennessee. This gave us extra time to explore the big city.
In fact, I’m writing this from Jellystone Park right now. I’m excited to keep you updated for the next few days!

20 thoughts on “The Colossal Columbus Disappointment- Bless Their Hearts”