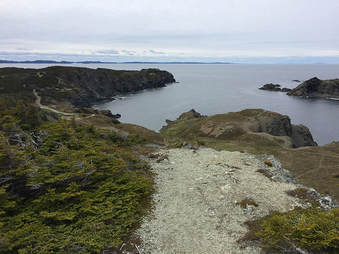 Imagine the top of Granite Tors ripped from its mountain and dropped onto a hilly fjord, and that pretty much summarizes all of Twillingate. The town is quiet, and as friendly as Newfies come (which is really saying something). The town’s sites are world-wide famous for their sea-side cliffs, rocky islands, and whales. Although despite our relentless efforts, we have still not spotted any humpbacks, but have our fingers crossed for the upcoming eighteen hour ferry ride. All of us spent an hour at the cliff-side “Lighthouse Lookout” spotting icebergs, and a seal. Me and my dad took a trail that wound its way to a spit of rock hugging the foot of the lookout’s drop off. The trail balanced itself along the spit’s lofty spine, with either side swooping into a steep pitfall of craggy sea rock eroded to a point. Once we stood balanced at the edge of the trail head, a green shaded cove (interestingly named “Nanny’s Hole”) was revealed. The water was incredibly clear, and a black, gaping drop off could be seen engulfing the heart of the small bay. Surrounding the pool were steep spiraling rocks, pounded by waves and sea spray. Foam rolled its way in and out of thousand year old crevices, and seagulls swarmed selfishly near their stony homes. On the walk back we shinnied up the little finger of moss and rock, rooted into an elevated peninsula. As we explored the peninsula’s grassy flat, we found a rock chute dropping twenty feet to a stone floor. The tiny stone compartment dug into the plateau like an old well. At the top of the hundred foot tall cliffs, it kind of looked like an elevator reaching the top floor. A chute of loose gravel funneled inward from the grass, and downwards to the bottom shore. If anyone stepped near the edge, there was no way they could step their way out.

That night we went to a “Split Peas” concert, and arrived as the only few in the room who were under the age of forty (okay, maybe fifty…  Fine, sixty). The band is just seven elderly (but lively) women who play and sing traditional Newfie music. If you don’t know what that is, just think of polka, Zydeco, and folk kind of mashed into one. Despite the age gap, the night was a lot of fun. At the end of the night me and a few others from the crowd got to play the ugly stick in the finale (which I didn’t know was an instrument either).

275 thoughts on “Rocking the Ugly Stick with Some Old Ladies”